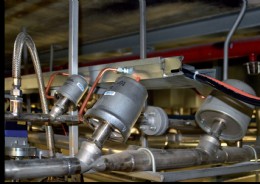 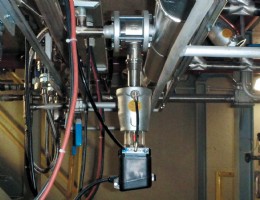 Tyre curing presses work at high pressures of steam, water, and nitrogen, as well as at high temperatures. In addition, the very short processing cycles require extremely robust valves for very high cycles, so that good operating efficiency is achieved with the service live being as long as possible.

A large number (that grew every year) of different valves of various manufacturers had been used in the past in the curing installations at this site. This led to increasingly bigger problems in terms of maintenance and spare parts procurement. Starting in 1999, these systems began to be retrofitted uniformly to Schubert & Salzer technology, in order to, above all:
 optimise the control accuracy
 extend the service lives under the harsh operating conditions
 simplify the maintenance
 reduce the range of models
 and also reduce the processing-heat waste.

Space-saving valve construction
Initially, angle seat valves of Type 7010 were used in a special high-temperature design with threaded Great Prospects for Tyre Curing Presses connections. The special advantage of 7010 angle seat valves is the high wear resistance. Due to the rapid wear of the seating seal, the ball valves previously used for this purpose regularly led to leakage and required maintenance after one to two months. The construction of the 7010 angle seat valves allows selfcleaning of the valve seat. This is very important under the critical conditions of vulcanisation with deposits and corrosion in the pipeline. The 7010 valves from Schubert & Salzer operate at the same place without problems for 2- 3 years without leakage.

In the course of the Continental development, the flange connections of the angle seat valves were replaced by a welding connections which significantly reduced the joining expense and the weight of the valve. Also, the risk of leakage at the connection got eliminated. Even with a welded design, the maintenance remains simple, because for maintenance one can simply unscrew the actuator from the valve, the body does not have to be removed from the pipe.

This construction can be easily insulated, which significantly reduces the heat losses at the valve. With the single acting actuators used here, the number of control air supply lines is also reduced; the safety of the press systems is increased in the event of the loss of control or power.

After the very good experiences with the angle seat valves, Continental also decided to convert the curing installations from hot water to steam based on Schubert & Salzer technology. Instead of an inlet pressure of 3 bar, the valves must now also be able to handle 17 bar. Sliding gate valves are best suited for this purpose, because they can be used simultaneously in both areas of application.

Less wear in all operating situations
The heart of the sliding gate valve is composed of two slotted disks that slide one on top of the other and are sealed relative to each other. A sealing plate fixed in the housing perpendicular to the direction of flow has a defined number of transverse slots of the same size. A rotationally fixed disk with the same arrangement of slots is moved vertically and thus changes the flow cross-section. The subsequent pressure difference presses the moving disk onto the fixed disk. The sliding gate valve thus forms a seal without any metallic seat. This functional principle also causes a self-lapping action of the moving sealing disk. This area seal is thus considerably less susceptible to faults than a ring seal typically used in globe valves. This design achieves leakage rates of < 0.0001% of the Kvs value.

In the event of maintenance, all common valves require the disassembly of the entire valve housing, in order to reach the seating elements. And this requires, by experience, the help of at least two workers. This is not the case for sliding gate valves. The throttling element can be disassembled and serviced by a single person on site in the plant. After disassembly of the valve, only four cover screws have to be loosened and then the functional unit can be pressed out and replaced.

In curing installations, the following properties of sliding gate control valves have proven extremely advantageous:
 very long service lives, that exceed those of globe control valves by up to seven times
 for every operating requirement in the system, the valve can be optimised with a corresponding Kvs value, which requires merely the simple replacement of the fixed disk
 the optimised Kvs value significantly extends the service life of the valve
 the high control accuracy of the sliding gate valve allows a shortening of the press cycles resulting in increased productivity
 simple and quick maintenance of the valve by replacing the easily accessible disk pair.

No application too severe for KKI by David Lamb, Sales Director

When traditional valves with a metal seat are used to shut off and restrict ...

Under pressure however, in applications subjected to high loads such as valve ...