One of the four fermentation tank towers at the Munich waste water plant. Rotork Schischek actuators are installed in the lamp at the top of each tower. 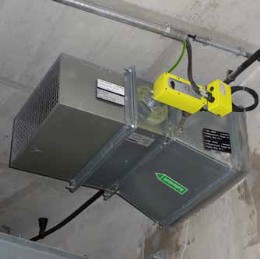 The ExMax actuators have been installed in the digester and fermentation tanks, where all electrical equipment must be approved for use in hazardous areas. Built inside four large towers, the fermentation tanks mix the waste at a defined temperature to produce the biogas. For optimum performance the inner tank temperature must be maintained at 38ºC. Six ExMax actuators are installed in an area known as the lamp atthe top of each tower for the operation of air dampers to balance the inside temperature with fluctuating ambient temperatures on the outside.

Factors favouring the Rotork Schischek products for this application include their compact size, ease of installation, standardised connections and Zone 1 hazardous area explosionproof certification. In addition Rotork Schischek has developed established relationships with the damper OEM, local engineering companies and the end user.