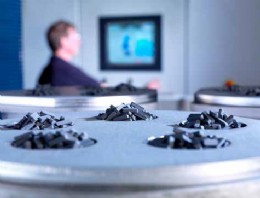 Hardide TSPs on the reactor

Hardfacing specialist Cutting & Wear today announced the development of a new TSP (thermally stable polycrystalline) diamond hardfacing material that will increase the life of drilling tools operating in highly abrasive environments by up to 10 times and cut the cost of drilling operations.

The announcement was made at the SPE IADC Drilling Conference and Exhibition being held on 17-19 March in London. The new material incorporates Hardide-D, the first successful metallurgically bonded coating for TSP diamonds that is suitable for brazing, extreme loads and aggressive media. Hardide-D has been developed by coatings innovator Hardide Coatings (stand no. 231) and coating of the TSP diamonds is performed for Cutting & Wear (stand 36) under an exclusivity agreement.

Cutting & Wear in-house wear tests have shown that the new TSP Xtreme inserts give a 200 times improvement over tungsten carbide inserts. They can be applied on downhole tools that need gauge protection such as stabilizers, bent housings, logging while drilling tools, rotary steerable tools and downhole motor bearings.

The life of drilling tools can be extended considerably up to 10 times by using the TSP Xtreme insert, most significantly tools whose life is determined by the life of the hardfacing, also non-magnetic tools where reheating for hardfacing compromises the non-magnetic steels properties and life, leading to significant savings for the industry.

Mark Russell, Managing Director, Cutting & Wear said: The new material is an evolution of TSP which has been used successfully for gauge protection of PDC(polycrystalline diamond compact) drill bits and steering elements on rotary steerable tools. The development of the TSP Xtreme insert has made diamond hardfacing technology available for more applications and practicable for workshop application anywhere in the world.

Philip Kirkham, CEO of Hardide Coatings said: Diamonds are notoriously difficult to attach and are prone to oxidation and graphitisation, limiting their use in hardfacing. Previous attempts to solve these problems have been unsuccessful due to the porosity of other coatings and their weak adhesion to the diamonds.

Hardide-D overcomes these hurdles as a pore-free tungsten carbide-based adhesive and protective coating which chemically bonds to diamond and has good wettability with brazing alloys. Other potential applications for the Hardide-D coating include PDC drilling bits.