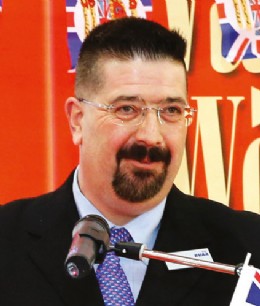 OK lets put this into perspective. 2017 is the 100th Anniversary of the battle  or bloodbath if you prefer  of Passchendale. Or, depending on your politics, the arguably even more blooddrenched Russian Revolution.

What I want to focus on is far less historically significant, but it is important nonetheless.

Ive recently had to attend a couple of funerals of old chums who worked in the trade association sector. On both occasions, save myself and one - perhaps two - others, no-one there from the industries concerned to pay their last respects to people who worked tirelessly to advance their sector of industry.

Actually, this isnt the first time this has happened to me. And its quite a humbling experience. Also, a reminder, were it needed, that we are all, no matter our current job or status, transitory and merely temporary tenants of our allotted position at work, as indeed we are in life.

So why do trade associations forget? It may be that as each group of contemporaries passes through their Association life, much like the Venerable Bedes sparrow flying through the proverbial banqueting hall, it is but a very brief moment in the overall lifespan of the Association. The work these individuals do at the time is largely hidden from view, but appreciated by those that know. But as new cohorts come in - and old ones rotate out and retire - the value of that work becomes less understood. Less appreciated. Indeed, ultimately, often superseded.

Being a young whipper-snapper myself when I started in associations, Ive had the benefit of seeing many of these Association stars in action, rise to their zenith and then regrettably, fall into obscurity, largely forgotten. I praise the day, with my Boards blessing, I decided to make the late Peter Churm our Man of the Year in 2009. Indeed, BVAA has routinely recognized the unsung work of its exceptional members.

As a nation we collectively cringe however at some of our more enthusiastic colonial cousins, who recognise even the slightest small act with an award. We are not American as it has been put to me more than once in my career. My argument is that how small that contribution has been is often in the perception of the observer, not the recipient. Ive seen these guys (and it is predominantly guys  something else we need to work on) work though some pretty tough sessions, negotiate tricky, occasionally openly aggressive meetings. That a conclusion is ever reached is largely down to their tenacity and endless patience and - simply - plain hard work.

BVAA will continue to recognise its champions, because it is those individuals who make the Association. To this end the BVAA Directors have agreed that we will erect at BVAA HQ an Honours Board to recognise permanently the good works of these unsung individuals.

In a downturn, it is inevitable that all costs are examined - often ...