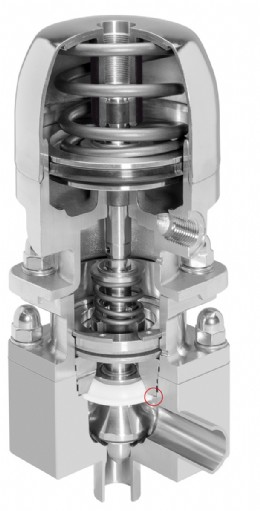 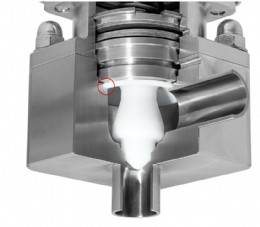 Detail of a 3A version, whose media wetted section is completely free of elastomers. Hermetic seal between the medium and the actuator via the PD diaphragm (see marks). 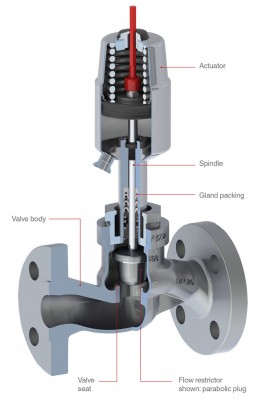 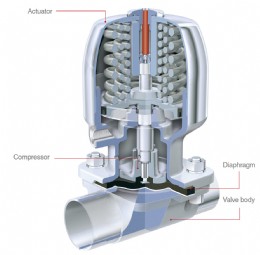 GEMÜ has invested in a new valve design for hygienic and aseptic control valve applications for small volume dosing in the pharmaceutical, biotechnology and food/beverage industries.

The requirements for aseptic/hygienic and operational safety in the pharmaceutical industry, the biotechnology industry and the foodstuff and beverage industries are becoming ever stricter as a result of increasing legal requirements such as the Food and Drug Administration (FDA) Regulation (EC) No. 1935/2004 or the Hazard Analysis and Critical Control Point (HACCP).

GEMÜ developed the PD (plug diaphragm) design as a way of meeting the legislators requirements and catering to customer requirements associated. The design combines the advantages of proven diaphragm valve technology, which has always guaranteed hermetic separation of fluid from the operator, with excellent fluid control characteristics. With the PD design, a PTFE diaphragm has been developed that achieves the controllability of a globe valve and also fulfils the strictest purity requirements. When complying with specific control parameters, it is even possible to dispense with elastomers entirely.

To further improve the quality and purity of our own foodstuffs and medicines, in future all processes in the food and pharmaceutical industries will be controlled more effectively, while the purity and hygiene of the processes involved will be subject to stricter requirements. For example, aseptic valves are currently being deployed in sections of the pharmaceutical and foodstuff industries where no aseptic valves have previously been used. The improved cleaning and sterilization associated with this, as well as the smooth processing of the food ingredients / pharmaceutical active substances, result in our foodstuffs and medicines having both a longer shelf life and better quality.

When looking for a valve that is easy to clean and suitable for both CIP and SIP processes, a diaphragm valve is the first choice. Diaphragm valves can also be used for control applications, insofar as the desired flow rates are sufficient in a modified linear flow curve. However, diaphragm valves soon reach their limits when a fine batch is required or a large control range must be covered, as they do not offer any option for enabling a defined cross-sectional area. Although globe valves with flow restrictors are precise control valves, they are not aseptic. The effect of the valve spindle passing back and forth through seals means that medium is often transported into the gland packing area and no longer removed during system cleaning. This allows dirt particles to accumulate in this area and/or the multiplication of bacteria.

In order to avoid this, bellows made from PTFE or in stainless steel are often used as actuator seals. But with this design solution too, medium can be deposited between the bellows convolutions. Depending on the fineness and depth of the bellows, it is virtually impossible to clean the system adequately  particularly in sections of the bellows that do not see a great deal of flow. Cleaning problems can occur with bellows sealed valves, particularly with fibrous media or media containing pulp.

With the newly developed GEMÜ PD design, the GEMÜ 567 BioStar® Aseptic Control Valve allows small volumes to be regulated extremely accurately and under aseptic conditions from 80 l/h to 4,100 l/h for the pharmaceutical, biotechnology, food/beverage industries. Plant operators and plant designers can use this control valve to implement typical applications, such as dosing of gaseous and liquid media. The GEMÜ 567 BioStar® allows a very wide range of aseptic applications to be handled both generally or for filling processes, such as highprecision dosing and control of trace elements, additives, growth substances, flavourings or colourings, preparation of biocultures, pressure control for WFI systems, aseptic tanks and fermenters, conditioning solutions and pressure and flow controls. It can also be used in the manufacture of beverages, e.g. for the carbonation of beer, soft drinks and mineral water, as well as in the production of foodstuffs, such as in UHT systems, analyzers, inline mixing systems and high-gravity installations. In conclusion, it can be said that the GEMÜ 567 BioStar® control valve opens up countless opportunities and potential applications in the field of aseptic media control.

For the GEMÜ 567 BioStar® Aseptic Control Valve, a new solution approach was therefore adopted to achieve hermetic separation of the medium from the actuator, while simultaneously achieving excellent valve control characteristics. The separation of the area conveying the medium from the actuator was implemented through a newly developed PTFE diaphragm, while control is effected via a parabolic plug.

The basis for this was the GEMÜ PD (plug diaphragm) design. The benefits of the diaphragms and the angle valve body are associated with their cleanability and the cavity free geometry. This makes the valve a suitable control valve for aseptic areas and a very wide range of control applications. However, it can also be used in other sectors with strict demands on control accuracy and cleanability. As the GEMÜ 567 BioStar® control valve has been designed for use in aseptic applications, not only the elements which come into contact with the media, but also the valve body and actuator, are made of stainless steel or resistant high performance thermoplastics. The use of stainless steel also allows the outer surfaces to be cleaned using all standard cleaning agents.