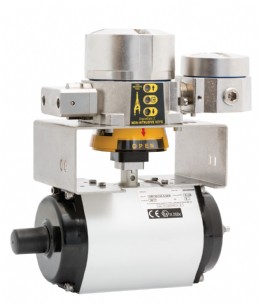 Testing the installed base is an incredibly important aspect of any valve monitoring program, and partial stroke testing (PST) methods are the go-to solution because of the related safety and cost-savings benefits.

PST can extend intervals between full stroke tests, enable operators to plan inventory for maintenance turnarounds, and in some cases, reduce the need for redundant valve solutions. Yet, from mechanical jammers and modulating valve controllers, to solenoid valves and smart positioners, plant operators have had a limited selection of PST methods to choose from, each providing varying features that solve some problems, but present others in the process.

Additionally, these traditional methods, while capable of performing the basic PST function, dont have the ability to capture usable data and translate it into valuable diagnostics, a luxury we as a society are becoming more and more accustomed to in other aspects of our lives. However, as it is in all industries, with every mechanical solution comes technological advancements that offer expanded benefits capable of revolutionizing the way a process is conducted. The digital position control transmitter is that advancement for the process of partial stroke testing.

Smart technology has enabled manufacturers like Westlock Controls to develop an automated PST method that offers broader diagnostic abilities, easier implementation and a more cost-effective maintenance program. The digital position control transmitter is based on solenoid valve (SOV) technology and is capable of testing the complete automated valve package, including the SOV, electronically measuring the valves position and creating a feedback signal using analog and/or bus technology to report the valves true position to the plants control system.

Unlike the PST methods of the past, digital position control transmitters can capture diagnostic information during the full stroke test, as well as an ESD event and translate that into predictive data that can be used to determine which automated/discrete valves are healthy and which are not during plant turn-around, before an emergency shutdown event occurs.

Westlock, one of only a few digital position control transmitter suppliers, offers this technology through its Digital EPIC product line (versions 1 and 2). In addition to the features already listed, the latest Digital EPIC-2 offers reliable non-contact position feedback with digital communication via HART® protocol in an integrated package, providing 4 to 20mA feedback so the user can validate the information received and be confident that the valve not only shifted, but went to the fully closed, tight shut-off position.

However, the most interesting of the expanded features offered, and an approach unique to the Digital EPIC-2, is the ability to store up to seven full stroke tests in non-volatile memory. Five of these are diagnostics tests, including baseline, dynamic baseline, and maintenance signatures which can be reviewed on the users host system via DD/DTM technology and used to make determinations on valve health and schedule maintenance accordingly.

The other two tests (integrator and installer) are used to document the function of the valve assembly, both at the automation supplier or OEM location, as well as after being installed in the field by the contractor, assuring traceability along the entire valve package commissioning process.

Digital position control transmitters represent an evolution in PST and valve maintenance. Thanks to products like the Digital EPIC-2, plant operators have access to a wealth of information about their in-line valves, allowing them to make more informed decisions that directly impact personnel, safety and costs.