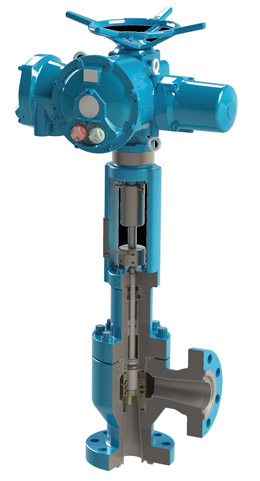 Even in the earliest days of the industry, oil and gas production has tested human ingenuity to the limits, thanks mainly to the often remote or inhospitable environments where reserves are found  from the sub-zero temperatures of remote Siberia, to the deep water wells of the Gulf of Mexico, to the desert temperatures of the Middle East

With increasing global demand for oil and gas, as well as the competitiveness of the sector, pipeline failure is simply not an option. For this reason, engineers are looking to specify innovative equipment which can handle the challenging environments and more importantly, guarantee reliability.

IMI CCIs Mike Semens-Flanagan outlines the important role choke valves play in maintaining effective energy production in oil and gas reserves, and also looks at a new innovative range of choke valves which have been designed to manage application issues with wide rangability.

Increasing drilling activities have amplified the demand for oil and gas pressure control equipment, with choke valves performing a vital role in controlling the flow of the fluid exiting wellheads. Choke valves serve to stop pressure from the reservoir and regulate the downstream pressure in the flow lines.

They are ideal for severe applications and for tackling issues such as: high pressure drops; high flowing velocities; corrosive fluids; H2S; CO2; low temperatures; steam injection; and wells with heavy erosion potential. Malfunction or failure of a choke valve can severely compromise safety, production and the environment.

There are a number of issues that can cause a choke valve to prematurely fail. Velocity for example can cause body, trim and piping erosion, while corrosion is a significant reason valves may fail. Commonly it can be associated with the choice of wrong materials, and its worth bearing in mind while one well may produce CO2 another will not and this can ultimately speed up corrosion.

A wellhead choke controls the surface pressure and production rate from a well. The type of choke selected will depend on reservoir pressure, tubing size, amount of gas, and amount and density of liquids.

A common mistake is to use a choke valve based on the history of an area or region, it must be acknowledged that one well may differ from another. For this reason, a one size fits all approach for choke valves for the oil and gas sector is not a possibility given vastly differing operating conditions encountered in fields in different parts of the world.

IMI CCIs choke valves are designed relevant to the region and tailored to the harsh conditions found in its extraction facilities. For example In the Middle East regions oilfields the oil extracted frequently contains high quantities of gas  up to 8 per cent H2S (or sour gas) and up to 4 per cent CO2 (acid gas).

The gas content, when coupled with the typical operating temperatures of -40ºC to +50ºC, can create significant challenges for choke valves in the form of corrosion, in an application where sudden or catastrophic valve failure cannot be countenanced.

As a leading manufacturer of critical flow control solutions for the global oil and gas industry, IMI CCI plays a key role in facilitating the safe extraction of oil and gas from the most difficult fields around the world.

To address the issues typically associated with oil and gas exploration in the Norwegian region, IMI CCI, undertook detailed research of current choke valves operating in these applications and customer opinions to truly understand these issues and set the benchmark for the next generation of choke valves.