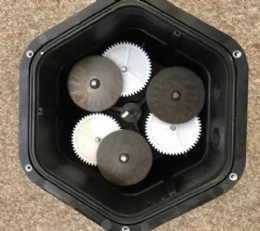 Since it was first introduced at the 2014 Celtic Manor Conference, The Smart Actuator Company has supplied thousands of its Medium 40-100 Nm SmartAct® electric actuators to distributors and customers worldwide.

One of the original push button models was supplied to a UK customer and powered from an external power supply. The modulating operation cycle time turned out to be on average 2 seconds which was too quick for the standard 4 cell lithium ion internal battery to recharge between operations.

One of the risks involved in by-passing the battery in this way is that power surges can travel directly to the electronic control board (PCB). After more than 3 years in operation an external power surge recently knocked out the master motor controller chip on the PCB. SmartAct® support was called in to investigate and were amazed to find that the unit had faithfully recorded the more than 23 Million operations it had done since it was installed!

They were also delighted to find that the internal gearing and motors were almost as new and had coped with the 100 Nm demand from the Large Butterfly Valve extremely well. Any questions about the durability and rugged nature of the drives and gearing had been well and truly answered in this extraordinary application. The unit has now been fitted with a replacement PCB and the newer version touch button lid. It will be kept in a place of honour in the SmartAct® Hall Of Fame!

The new Small SmartAct® 0-40 Nm Actuator is due for release in Q4 of 2018. The material science, PCB and motor drive design is just a scale down in size compared to to the Medium model. The SmartAct® team have had prototypes of the new units on test and trial for well over a year and are confident they will be just as robust and durable as the Medium. After all, they believe records are made to be beaten!!