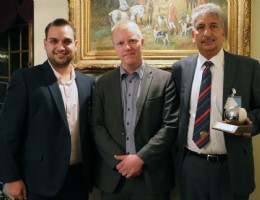 Ultravalve has been working with Vexve Oy, the worlds leading District Heating and Cooling Valve specialist, for a number of years and have already established a strong working partnership. As Ultravalves managing director Bill Brach comments: It was a complete surprise to receive the award, but a great recognition of what has been achieved.

He continues: Both our companies share a similar ethos and core values, with generations of the same family at the helm of both companies, giving us a similar approach and business principles.

Vexve has given Ultravalve a further seal of approval by significantly extending their contract as the exclusive UK partner for Vexve and Naval Valves and expanding the territory over which Ultravalve enjoys sole supplier status to include the whole of Ireland.

Background Information: Vexve specialise in District Heating & Cooling Valves, a large quantity of which were supplied for use in the recently completed ground breaking Greenwich Energy Centre project.