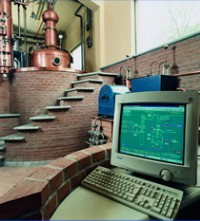 The second of a series of three articles, covering the features of a modern steam system and how it could and should maximise efficiency and reduce operating costs
By Brian Johnston, Spirax-Sarco

Improving Efficiency in Steam Systems
In the last edition of Valve User, details were presented on why and where steam is used. This article moves on to look at some of the techniques and advances made allowing steam to be produced and used in a safe and cost effective way. These techniques are readily applicable to steam systems today, but often overlooked because of the forgiving nature of steam installations. The fact that they dont stop working can mean they are not maintained as they should be. A small amount of regular maintenance, and a few additions, will keep any steam system operating economically and safely.

Generation
In the boilerhouse, the main aim has to be to convert the energy contained in the fuel into steam in an efficient manner. There are control systems readily available to fine-tune the fuel combustion process, but the major area for savings in the boilerhouse today is still minimising heat losses. Major areas when loss occurs are in the flue gases and in the water extracted from the boiler to control TDS (Total Dissolved Solids) or to remove sludge.

To recover some of the heat in the flue gas, an economiser is often fitted. These have traditionally been used to preheat the boiler feedwater but designs are now available which produce steam rather than just hot water. More energy recovery is therefore possible. Control of boiler water TDS and bottom blowdown (sludge removal) have in the past been done on a manual basis. With manual control, there is always the possibility of over-compensating, meaning more hot water from the boiler is lost than is necessary. Manual controls may also present safety issues, particularly with unskilled operators. Modern controls systems bleed only enough water from the boiler to maintain the TDS at its maximum level (as determined by the boiler manufacturer). As this blowdown is done on a continuous basis, heat recovery from it is feasible and an economic means of raising the temperature of the boiler feed tank.

In older boilerhouses, too high a feedtank temperature wasnt considered desirable as cavitation could occur in the feed pumps. Modern pumps are able to pump hot water with a lower inlet head and not cavitate. Keeping the feedtank temperature high also has the added effect of driving off oxygen, meaning less water treatment chemicals are needed. Energy isnt the only saving possible in a modern boilerhouse. Traditionally there has also been the cost of manpower, but with modern controls, not just on blowdown as described but also on level, the need for a permanent attendant is reduced and in some cases eliminated.

Distribution
Just as in the boilerhouse, reducing energy losses in the distribution is vital in operating a cost effective steam system. But reducing distribution heat loss has an added benefit. Saturated steam, when it loses heat, condenses to water. This water has to be removed through steam traps. Minimising heat loss through the use of good insulation not only saves heat (money!) but improves steam quality (dryness) as well.

Its important not only to fit good insulation, but also to maintain it. Insulation that is missing or waterlogged wont just result in significant energy loss. It can also present hazards through scalding or waterhammer damage to pipework caused by accumulated water.

Usage
For most applications, it is the heat energy in the steam that we want to extract. Of course as mentioned in the first article in this series, steam can also be used for power generation, sterilization, humidification etc. Heat energy is normally obtained through a heat exchanger. The traditional shell and tube heat exchangers (calorifiers) are being replaced in many plantrooms with plate and frame types. Their smaller size means less heat loss and less valuable plantroom floor space is taken up. An additional saving is that they are often not subject to the same regular insurance inspection requirements as a shell/tube design would be.

Flash Steam Recovery and Condensate Return
Allowing flash steam to escape and not returning the water (condensate) produced when the steam condenses are major areas of loss. Both account for a considerable waste of energy, as they always have, but now the wastage of water is also a serious issue. Condensate is water, its hot and it has already been treated, so three very good reasons to return it to the boilerhouse for reuse. As was mention in the Generation section above, modern centrifugal pumps can handle hot water without cavitation and of course steam/air operated pumps can also be used. Flash steam is best recovered and used at the point it is generated. This may not always be feasible, but a flash steam heat recovery system can now be fitted back at the boilerhouse, capturing flash steam that would normally be lost through the feedtank vent. The heat (and water) in this captured flash steam is used to preheat the boiler feedwater.

The use of such an arrangement, capturing all of the condensate and the flash steam means we move a bit closer to what is effectively a sealed, or no-loss, steam system.

Other advances
Perhaps the most significant advance in modern steam system design is the increased use of instrumentation to monitor system operation. This may be meters to measure flowrate, devices that measure aspects of steam and condensate quality such as dryness, conductivity/turbidity (to test for contamination), or monitors that check the operation of steam traps.

All of these give valuable information on the systems health and will result in improved performance as long as something is done with the information they provide!

Steam technology has developed faster in the last 10 years than any other decade. Compared to older systems, modern steam systems are:

In the final article in this series, we will look at some of the more unusual uses for steam, uses that demonstrate just what a flexible and versatile fluid it is.