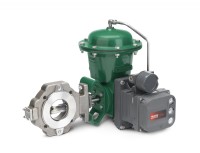 INEOS Chlor, a major European producer of chlor-alkali and chlorine derivatives, reduced process variability by 5 per cent at its plant in Runcorn, United Kingdom, by replacing traditional butterfly valves with Fisher® Control-Disk valves from Emerson Process Management. The reduced variability enabled the plant to increase throughput, avoid several unplanned shutdowns that could have cost as much as 450,000 Euros, and achieve a 96 per cent Overall Equipment Effectiveness rating for the unit where the valves were installed.

For a plant this size, even a modest reduction in variability can have a significant payback, said
Barry Makepeace, INEOS Chlor control & instrumentation engineer. The Control-Disk valve applications not only saved us money, but also enabled us to optimise process control without sacrificing flow capacity or needing to re-pipe.

The Runcorn plant had previously used traditional butterfly valves to control the temperature and flow of cooling water to the primary condensers. Tight control is essential because if the condensers temperature is too low, there will be residual chlorine in the system, which has to be removed. If the temperature is too high, there is an increased risk of a safety trip or plant shutdown. Each trip and subsequent unplanned shutdown can cost INEOS Chlor up to 75,000 Euros.

Unfortunately, the traditional valves had a small control range and a large deadband, which reduced their ability to respond to temperature changes. In the previous 12 months, the plant had experienced 23 trips leading to a significant loss of production.