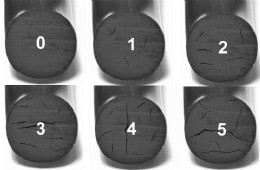 In applications where RGD is a possibility, valve OEMs and end-users require parts moulded from elastomers designed and proven to be resistant to this mode of failure.

As a general guide, RGD can occur from pressures of 5MPa (50bar) where the pressure drop is greater than 1MPa / hour (10bar/hour). This can lead to surface blisters, splits or catastrophic failure in elastomeric seals and components. Originally referred to as explosive decompression, the current term used to describe such pressure drops, and this mechanism of seal damage is Rapid Gas Decompression (RGD).

RGD resistant
Although no elastomer is RGD proof; elastomers can be formulated, compounded and processed to be highly RGD resistant and several well known test methods exist for evaluating RGD resistance in elastomeric seals including the most widely quoted standard; Norsok M710 Annex B.

Those looking to purchase elastomeric seals and components for use under RGD conditions will have seen many brochure claims such as Approved to passed to equivalent of or qualified to, but what do these claims actually mean in terms of operational performance?

Norsok performance benchmark
In assessing the performance of its own elastomer compounds for RGD performance, sealing material and systems manufacturer James Walker uses the Norsok M-710 qualification criteria. Using its own highly developed RGD testing apparatus at the companys UK Technology Centre, the standard test regime is 100˚C (212˚F) using a pressure of 150bar (15MPa) and a decompression rate of 35bar/minute (3.5MP/minute). This decompression rate is actually well in excess of the 20bar/minute industry standard required under Norsok M-710.

Norsok rating system
Following the decompression procedure each test seal is cut into four equal radial sections and the resulting cross sections examined for internal cracks with a microscope using at least 10x magnification. Observations are then rated from 0 to 5. Zero denotes no damage, 1 to 3 increasing damage sustained, 4 and 5 denoting too much damage sustained to pass the test.

A perfect 0000 rating demonstrates that there was no evidence of any damage on any sample following the RGD test.

It is still possible however to claim a pass on the Norsok M-710 rapid gas decompression test even at a rating such as 3333.

Compromised safety and performance
The potential difference between a 3 rating pass and a 4 rating fail can be incredibly small, as is evident from the example O ring sections shown here. Under true operational conditions, damage of this level will impair seal performance and offers virtually no safety margin.

It must be remembered that these levels of damage are being created under carefully controlled test conditions. Under operational conditions, media composition and fluctuations in temperature can further compromise RGD performance and significantly increase the possibility of seal failure.

Bearing this in mind, even a material with a Norsok rating of 1 or 2 is sustaining damage during the test which under operational conditions would compromise performance, reduce safety margins and could lead to failure over time.

Further considerations The Norsok standard requirement is to test O-rings of 5.33mm cross section. Many end-users incorrectly assume that this means the elastomer concerned is suitable for RGD use full stop. This is sadly not the case at all. An elastomer that passes at 5.33mm section will not necessarily pass at larger sections. Tests have frequently shown elastomers passing with zero ratings at 5.33mm and failing catastrophically at 6.99mm.

Temperature is another critical factor. A material may pass with 0000 ratings at larger sections than the standard 5.33mm, but raise the temperature of testing and the same material may fail catastrophically even at the smallest section.

When selecting an elastomeric material for use under RGD conditions, simply checking literature for a Norsok pass is not always sufficient. The following points should be carefully considered;

 What were the actual test conditions and decompression rate?
 How does the test temperature compare with your application?
 What seal section was tested, and what section do you require for your application?
 Check the ratings obtained. Even a 1 rating indicates damage was sustained  is this acceptable for the application concerned?

Maximising operational safety
In order to maximise operational safety in terms of RGD resistance, James Walker utilises the 0000 rating (zero damage) as the benchmark for its own materials as this is the only rating at which the material has suffered no visible damage under test.

Whilst a pass of any level on the Norsok test obviously provides a level of confidence to purchasers and specifiers  a 0000 rating representing the ultimate assurance  James Walker is currently seeking to extend the RGD test regime in cooperation with a number of major oil and gas customers.

More demanding than current tests, the new regime is aimed at simulating more accurately the true operational conditions. This involves higher system pressures, faster decompression rates, higher temperatures and an increased number of decompression cycles. The examination process and damage rating system will remain the same as for Norsok, but the results will provide a more accurate picture of likely performance under operational conditions.

Whilst tougher testing regimes will inevitably result in a shorter list of suitable materials, it will provide greater confidence in operational performance for both the seal and associated equipment, essential as the oil and gas industry moves into increasingly hostile operating environments.