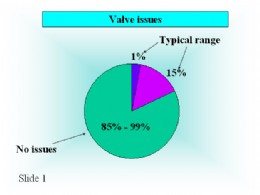 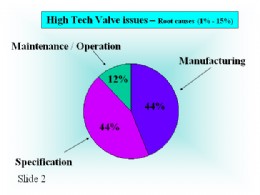 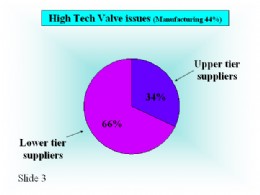 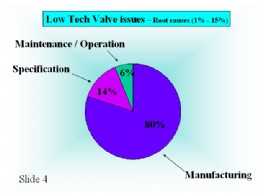 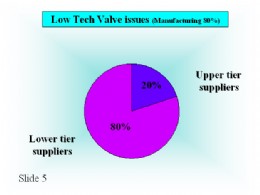 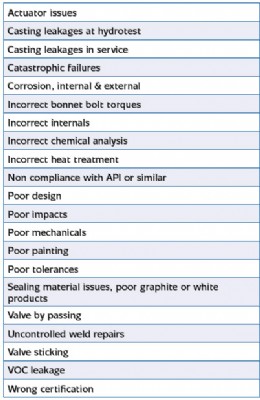 I am now in my 40th year in the industry and would like to share some generic data concerning issues facing the industry today.

General valve issue data
The data for issues experienced during plant operation is summarized in Slide 1. Typically somewhere between 1% to 15% of valves generated issues, with no issues between 85% & 99%. This is a broad base data which covers specific project valves to regular maintenance valves. I know all the readers would put themselves at the 1% issue level but I have to give some push back here as these clients are limited. At a recent conference in the USA there is a lobby of End Users that believe that the situation is far worse than suggested.

High Tech Valve issues  operations versus manufacturing
Slide 2 shows further details for High Tech Valve issue. Here we begin to see some interesting data. 12% of the valve issues can be attributed to poor / lack of maintenance or incorrect operational procedures. 44% can be allocated to manufacturing issues with the remaining 44% to incorrect specifications.

Now lets just think about that data. 56% of the issues can be directly linked back to the End User! Only 44% of the issues are linked to the manufacturer.

Comparison of the Low Tech Valve issues versus High Tech issues shows obvious trends. The influence of the End User on the issues is lower but surprisingly still present. Also the Lower Tier manufacturers are more evident which reflects market trends.

In another example a bellow seal valve bellows failed. The actual cyclic conditions were assumed rather than being checked.

Again a ball valve seat leaked due to incorrect seat materials being specified for the operating temperature.

A Double Block and Bleed valve failed due to incorrect internal design and manufacturing tolerances. The investigation revealed that the manufacture had been sub-contracted and poor quality control was evident.

An actuated valve failed to operate correctly. It was first thought that the error was under design of the actuator but the cause was due to poor valve stem clearance.

Needless to say many issues consistently cross my desk. Issues with casting leakages and weld repairs for example.

In conclusion valve issues are still evident in the industry today and I observe that as End Users continue to seek cheaper low tier suppliers the overall situation will not change in the immediate future. To the contrary it may take some time.