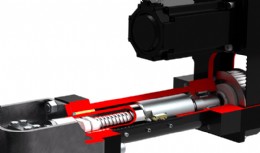 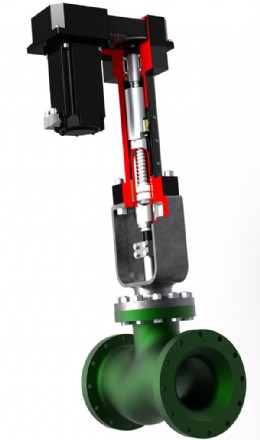 The installation of eighteen electromechanical actuators within the E.ON Power Station at Connahs Quay is now complete, providing performance benefits and increased safety within the plant. The installation follows design and development over a three year period by Moss Group Automation technicians, in conjunction with E.ON plant engineers.

Moss Group Automations solution was considered the optimum choice in being able to provide a high force and precise linear positioning system and speed, able to fully close the valve stroke - in some cases up to 450mm (18" ) - in less than 3 seconds.

In addition to oil related fire risks, environmental costs of hydraulic oil disposal were becoming increasingly more onerous for E.ON, with up to 250 litres of oil requiring to be disposed of on a periodic basis. Even non-flammable hydraulic oil alternatives were not considered economically viable due to the need to completely change the accumulator and hydraulic system to suit replacement oil.

The complexity and redundancy of the existing hydraulic system provided numerous leak points and maintenance protocols for inspection, leading to E.ON installing an expensive CCTV and sprinkler system to mitigate against fire. The patent-pending mechanical actuator and software solution utilises a precision grade ball screw with a high load capacity, fitted within a rugged steel casing  able to deliver forces in excess of 180,000N instantaneously through the use of a Servo Drive System.

Customer specific drive responses can be provided based on the valve design, initial force requirements and actual force requirements throughout the entire stroke. The control system utilises Allen Bradley hardware and Servo Drive System but alternatives (according to customer demand) can also be fitted with the design of the mechanical actuator - such that a wide range of industry standard Servo Drives can be installed quickly and easily.

This also adds an important element to E.ONs central control system. Any user of this type of application can monitor the number of key parameters in terms of motor current, linear position, motor torque and RPM. These provisions bestow confidence and assurance for the customer, allowing an element of control and the ability to accurately monitor valve actuator conditions and performance. The developed control system utilises a built in bi-directional load cell, allowing real time monitoring of load condition and force profiles.

When coupled with Servo performance of modern systems, speed and torque, an accurate control profile can be maintained and evaluated, facilitating the application of the appropriate tolerance banding. This enables the operator a very accurate picture of the valve actuator condition and enables accurate sizing of both motor and actuator. Typically initial force requirements are much higher in the first phases of actuation to crack open the valve position before reducing to a very low load in service.

Having spent considerable time in the development and testing phase, Moss Group Automation is confident about the market potential for hydraulic and pneumatic replacement using its proprietary developed technology in this field. With significant opportunities in this specific field, the company has already started work on the development of actuation systems to replace pneumatic and fuel valve applications.

A brochure providing over 30 pages of technical information confirms AUMAs ...

MCE Group plc are pleased to announce our partnership arrangement with DREHMO ...

A power station in New Hampshire which burns both natural gas and low sulphur ...

Rotork Process Controls has launched a new range of compact, robust and ...

SIPOS Aktoriks electric actuators have been included in a dam enhancement ...

The advanced capabilities of SIPOS Aktoriks electric actuators have enabled ...

The highly automated treatment facility, serving a population of 90,000, was ...