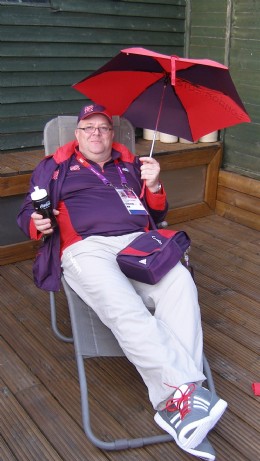 Adanac had a part to play in the London 2012 Olympic Games when Engineering Director, Neil West was offered a volunteer role. Neil spent time working alongside Omega in the Timing & Scoring Team in The Mall. Shortly after the games were awarded to London in 2005, it was announced that 70,000 volunteers would be needed. I soon recognised that something like this would only happen once in my lifetime and wanted to be involved.

The volunteer recruitment was a lengthy process, the initially opportunity to express an interest was followed about 2 years later by completion of the application form in 2010. Nearly a quarter of a million people applied to volunteer from which 100,000 were selected for interview. Neils interview took place in February 2011 and resulted in the role being offered in September. A series of training events took place starting in February 2012 to prepare Neil and the rest of the 70,000 Games Makers for what was being billed as the greatest games ever. I have really enjoyed the whole experience, Ive met some really nice people from a number of different countries and made some good friends. The camaraderie was fantastic, I found myself getting dragged into some bizarre situations including winning Bronze in a Grand Space Hopper race on Richmond Green the night before the opening ceremony.

Games-time Neil worked as a Judges Assistant for the three Race Walk events that took place in The Mall. I was assigned to an international athletics federation judge from Italy. My job was to record whenever my judge warned a competitor that theyd contravened a rule. Neil explained that the basic rules of Race Walking were pretty simple the athlete must maintain contact with the ground at all times, and the leading leg must remain straight until it reaches the vertical position As such, each time the judge saw an athlete break one of these rules they would issue as series of warnings. There were eight judges around the 2km course, an athlete faced disqualification if they received two warnings from each of three different judges. Neils job was to relay his judges warnings electronically to a scoreboard so that the chief judge could monitor the number of warnings each competitor was receiving as the race progressed. Unfortunately I had a hand in the disqualification of a number of athletes over the three races, quite a responsibility making sure I entered the right competitor number. London 2012 was the first Olympic Games to use the Omega electronic warning system, previously individual judges warnings were passed to the chief judge manually, normally by someone riding up and down the course on a bicycle. Neil says hes come away from the games with some great memories and plenty of souvenirs of the whole process; not least he gets to keep his uniform. The London 2012 bid focused on leaving a long term legacy of the games. In addition to inspiring and encouraging people to participate in sport, it also aimed to make more people aware of the opportunities that exist for event volunteering and the experience that can be gained from getting involved. As a result of London 2012, Neil has become involved in a project within Suffolk that has seen him helping at a number of local events, taking on a wide range of jobs from parking 3000 cars at an open water swimming event to supervising a team of inmates from a local open prison loading peoples unsold items on to a lorry at a giant car boot sale for a childrens hospice charity.

Unfortunately, work commitments meant I had to turn down a role at the Paralympics but Ive got my name down for Rio 2016.