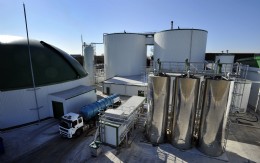 ReFood UK Limited is recovering more than 10MWh a day of energy and saving over £80,000 a year thanks to the use of heat recovery systems from Spirax Sarco at its new anaerobic digester (AD) facility at Doncaster.

The AD plant and associated combined heat and power (CHP) engines generate heat and 2.8MW of electrical energy from food waste. This is the first industrial-scale AD plant under the ReFood badge.

The companys parent group, Prosper De Mulder (PDM), is one of the UKs biggest recycling specialists and plans to follow the success of the Doncaster project by rolling out a network of ReFood AD plants across the UK over the next five years.

The sites two CHP units generate hot water as well as electricity, and this is used to drive the AD process. The AD process in turn breaks down 45,000 tonnes per year of food waste to generate methane gas and run the CHP engines. But the engines actually generate more hot water than needed, and thats where the Spirax Sarco systems come in.

The three heat recovery packages take the excess hot water at 90oC and use it to carry out three different heating roles within the plant. The first system raises the temperature of incoming water from ambient to 80oC before it enters the hot well of the sites steam boiler. The second one heats water from ambient to 80oC to feed the sites general-purpose hot water tank. The third maintains the temperature of the water that recirculates in ReFoods tank farm heating circuit, which typically needs raising from 70 to 85oC in order to prevent the oils and fats in the tanks from solidifying.

Without the systems, the site would otherwise need to meet its hot water needs from the steam boiler, so they are effectively helping ReFood to save money and reduce emissions that would otherwise arise from its new facility.

Robert Smith, PDM special project manager, says: The Spirax Sarco units have been very effective for the recovery of valuable waste heat which would otherwise be lost to the atmosphere. They make a significant contribution to the PDM Groups commitment to produce energy from renewable sources and reduce climate change.

ReFood is looking to install further units both at the plant in Doncaster and at their future AD facilities for further use in heat recovery.