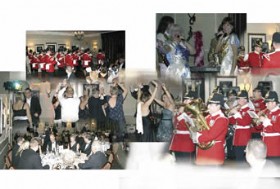 The November AGM at Wood Hall, Wetherby, also heralded the best attended BVAA Dinner Dance for many years, with a veritable whos who of the industry present. The event was completely sold out, and members and guests were superbly entertained, firstly by the hugely impressive, show-stopping Band of the Kings Division, then afterwards by the equally talented Abba Gold. The evening was rounded off with the ubiquitous disco and dancing into the early hours.

The 2008 Dinner Dance will be at the splendid Ettington Park near Stratford upon Avon on 28th November 2008, with a nostalgic return to Claridges planned for the BVAAs 70th Anniversary celebrations in 2009.
We would thoroughly recommend booking now to avoid disappointment!