EnerMech Shaping Next Generation of Engineers 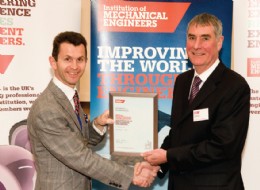 Mechanical engineering group, EnerMech, has been accredited by the Institution of Mechanical Engineers (IMechE) to mentor the next generation of chartered and incorporated engineers.

The companys EnerMech Academy has been sanctioned by IMechE to run a Monitored Professional Development Scheme (MPDS) which encourages the progression of young engineers.

At the same time EnerMechs Technical Director Phil Bentley, a Chartered Engineer for 16 years, has been awarded Fellowship status by the institution. Mr Bentley started off his engineering career on graduating from the Heriot- Watt University in Edinburgh, and since achieving Chartered status in 1989 he has held a number of senior engineering and management roles in the energy industry.

EnerMech provides a range of service lines to the international oil and gas industry, employing 2400 staff in more than 25 locations with operations in the UK, Africa, Asia, Australia, Caspian, Middle East, Norway and the USA.

Companies which adopt the MPDS are making a commitment to the development of young engineers who have the potential to achieve professional registration as a Chartered or Incorporated Engineer.

Phil Bentley said: Achieving Chartered Engineer status indicates that engineer is a committed individual who is capable of the highest levels of engineering ability. The EnerMech MPDS invests in young engineers, bringing out the best in them and encourages them towards continual learning and progression.

Under the MPDS, more experienced EnerMech engineers mentor their younger colleagues and offer support while working through the incorporated and chartered engineer process.

Mr Bentley added: This is a highly regarded accreditation, which is recognised globally in the engineering world and sends out a message that at EnerMech we are very serious about our engineering credentials. It is also an important factor when looking to recruit young professionals as they know EnerMech will support them throughout their engineering career.

Roy Begg, Cranes & Lifting Account Manager, had recently been accredited as an Incorporated Engineer and will mentor other candidates as he works towards achieving Chartership.

He added: Being accredited by IMechE recognises a certain level of experience and ability and the more you put in to this the more you get out. EnerMech supports people willing who commit to professional development as it benefits the business in the long-term. Mark Hunt, President of IMechE presenting EnerMechs Phil Bentley with his Fellowship accreditation

The BVAA one-day SILs course takes the attendee from the basis of IEC61508, ...

"Good and pitched at right level" - Shaw Valves "Very good with lots of ...

Please complete the form and return to Sarah Edginton. All training courses ...