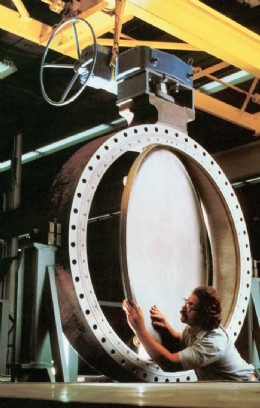 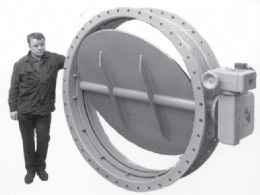 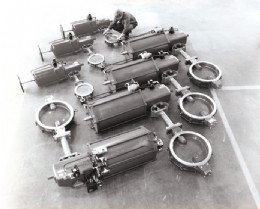 The evolution from an idea to a successful product family that can stand the test of time requires both dedication and persistence. It all starts with a challenge and innovative thinking. The most important ingredient, however, is determined people who are willing to invest time and systematic hard work into overcoming all obstacles along the long road to sustainable success. There are no shortcuts. Just hard work.

The evolution of the Neldisc® product family is no different. The story of the 40-year-old Neles butterfly valve series began back in 1973 when the co-founder of Neles Oy, Antti Nelimarkka, asked his team to finalize a sketch he had drawn in his legendary notebook. The challenge had been to develop a butterfly valve that could withstand temperatures up to 600 °C (1100 °F) and still maintain excellent tightness characteristics with long-lasting tightness and durability. As it was something that had never been successfully done before, it was the perfect challenge for an innovative company such as Neles.

The first of its kind
From the very beginning, it was clear that only a metal seated valve could work in such conditions. However, no such designs had ever been drawn out before. After 2 years of development, the Neles R&D team came out with something that is known today as the Neldisc valve. The U-shaped metal seat and elliptic disc formed a unique triple offset valve design, which we are used to seeing in many butterfly valve products today. At the time, this was a first.

The first deliveries at the end of 1975 exceeded all expectations and the valves were discovered to be bubble-tight even in high temperature conditions. The product contained many construction and manufacturing technology innovations. By the end of the development project IPR protection had been gained for the revolutionary elliptical disc design combined with the metallic seat ring in 13 different countries.

New applications discovered throughout the years
Originally the target industries included the refining, chemical, petrochemical and other process industries. Later on, in order to expand to liquefied natural gas applications, a low-temperature cryogenic, high performance butterfly valve was developed in 1982.

Many other prominent possibilities for this highly versatile product were discovered over time. In the early 80s we realized that butterfly valves are excellent for control applications, as there is no seat friction in the control range at all and the rangeability of the valve is surprisingly high.

To overcome the last true challenge in control applications, the high dynamic torque in big opening angles, S-Disc noise abatement technology was developed and patented in the mid 80s. The same technology, which is still a top-notch feature today, also enables the elimination of cavitation and reduces the overall noise of the valve. Further doors were opened by the realization that the butterfly valve could be closed much faster than other corresponding quarter-turn valves, such as ball valves, offering excellent performance in ESD and other on-off applications.

Todays full product portfolio
Since the early days, the development has continued. Today, the Neldisc product family has many members. The product is now available in all major end designs (L6 double flanged, L1 and LW as wafer, L2 and LG as lug) in the most usual pressure ranges with many options for demanding applications requiring highcycling resistance, steam jacketing, erosion resistance and so on. Even some weld-end designs have been done over the years.

In the past 40 years, we have supplied more than 700,000 Neldisc valves all over the world, comments Mikko Vuolanto, Product Manager, Neldisc butterfly valves. He continues, It is amazing how flexible the basic design has been in adapting to customer needs over the decades. For example, the Neldisc family conforms to even the newest, global fugitive emission standards, such as ISO 15848, and is fire-safe certified to the latest API 607 6th ed. while offering top-of-the-industry efficiency and performance especially in process industries.

There have been numerous memorable Neldisc valve deliveries over the 40 years. One of the most memorable was in 2004 when Metso delivered the biggest Neldisc unit manufactured so far, the 80 L6 series Neldisc butterfly valve to a gas plant in the Middle East. In 2013 a heavy 80 double flanged L6 valve was delivered, together with over 280 other butterfly valves, to the Sadara project in Saudi Arabia where this heavy 80 valve is used as a shut-off valve for the cracked gas in a polyethylene plant.

Development based on customer needs
Many success cases have actually been manufactured based on customer need and feedback. Thanks to the flexible basic design concept, the functionality of the valve has been easily extended to new applications. This approach, for example, has given birth to the erosion-resistant butterfly valve design, built specifically for a customer process requiring strong butterfly valve properties (maintenancefree) combined with extreme erosion resistance with metal seating  providing performance where a standard butterfly valve cannot reach.

Today, Metsos butterfly valve offering is the most comprehensive in the entire valve industry. In addition to Neles Neldisc and Neles B-platform engineered butterfly valves, Jamesbury soft-seated Wafer-Sphere butterfly valves together create a complete offering all the way to pressure class ASME #2500, including the corresponding EN and JIS pressure ratings  a unique product portfolio in the business.