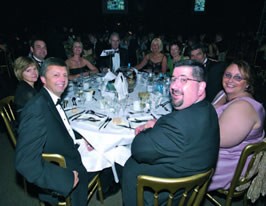 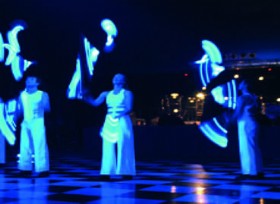 Rotork celebrated fifty years of international valve actuation success with a spectacular birthday party, held in a vast marquee in the grounds of Longleat House, close to the city of Bath where Jeremy Fry first started the company. Over 800 guests, including present and former employees, suppliers and local businessmen enjoyed a glamorous evening of food, drink and entertainment which even the appalling English summer weather could do nothing to tarnish! Entertainment was supplied by wandering opera singers The Three Waiters, a team of gymnasts and jugglers who had made a name for themselves at the Millennium Dome, Japanese inspired drummers from Scotland and The Bootleg Beatles. Preparations for the party started over a year ago, explained Rotork Sales Support and Marketing Manager Tony Scott: "The whole point was to create something special for those people who have done the most to make Rotork the world leader that it is today. Many met up with people who they hadnt seen in years. I lost count of the number of people who came up to me and said they had a great time."

Rotork were also the outright winner of the 2007 West of England Business of the Year Award, a prestigious annual event now in its twentieth year, organised by the international accounting and consulting firm Price Waterhouse Coopers. The award recognises a companys achievements and performance across a broad range of aspects including innovation, business management, future outlook, employee development and training, health and safety, commitment to the community and environmental responsibility. The rigorous selection procedure, performed by a judging panel comprised of leading figures from industrial, financial and business sectors, embraces the submission of an extensive written review of the business including performance figures for the past five years, followed by a detailed and penetrative visit to the companys premises. Competition for the award was fierce. In addition to Rotork the six finalists consisted of eminent companies in the construction, property maintenance and business management sectors and the National Trust. In the final analysis, however, the Rotork package of business achievement and innovation won through, proving once again that at the age of 50 the company can still outperform the toughest challengers. Research and Development Director Graham Ogden led Rotorks award winning campaign, which follows closely on last years success in winning a 2006 Innovation and Design Excellence Award. Rotork: 01225 733 200