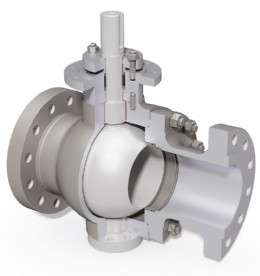 Designed for critical process applications like coal gasification, refining, petrochemical and pulp slurry, the Krombach® KFO 9136 is an extreme temperature and wear-resistant valve, operable in environments ranging from -20°F to 500°F (-29°C to 260°C) and special ranges up to 1300°F (700°C) upon request. Featuring a uni-directional single seat, the valve contains no body cavity, permitting a tight shutoff without the interference of trapped media. That, combined with its metal-to-metal sealing between the seat and ball, enables a zero-leakage sealing performance (in accordance with API 598 and API 6D) for superior fugitive emissions control in high temperatures, reducing potential downtime. Additional features include its energized seat with low friction-bearing design which enables a permanent seat-ball contact under recurrent thermal cycling, and reduces operating torque by over 20%.

The Krombach® KFO 9136 has been fire tested per API 607, 6th edition/ISO 10497 and is offered in ASME Classes 300 and 600, and sizes ranging from 8 to 16 in a two piece cast body design. Other features include a replaceable seat and ball for quick and easy repair, a blow-out proof stem for added safety, and a polygon stem-ball connection that ensures the most effective torque transmission. Several new animations have been developed to demonstrate the Krombach® KFO 9136. To access them, visit Cranes video library at www.cranecpe.com.