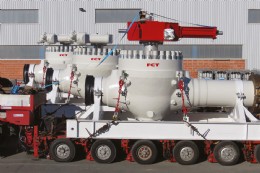 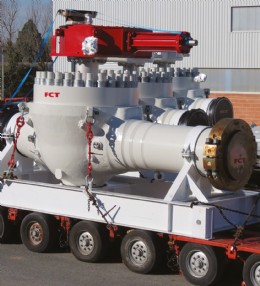 Emersons custom offshore solutions solved the critical problem of reliability and durability for a set of offshore platforms and are designed to last for at least 50 years.

Typical isolation valves installed in deep sea offshore platforms are expected to last about 30 years, with pigging occurring a few times per year. Now, with innovative engineering and design from Emersons FCT team, three large trunnion-mounted isolation ball valves with actuation packages are managing weekly pigging, while also extending the life of the valves to 50 years.

These large trunnion-mounted ball valves are better suited than double expanding gate valves, which were the previously preferred choice for offshore applications such as this. FCT engineered and manufactured these advanced automated isolation valves as part of an offshore platform installation off the coast of Norway in the North Sea. The FCT valve package was designed with tensioned bonnet bolting to allow smaller bolts, thus saving several tons of weight per valve. Each valve is a 38-inch, top-entry ball valve and weighs between 63.5 tons and 68 tons, excluding the electric or hydraulic actuators.

Two of the valves are electric-actuated and are tasked with isolating the pig launcher, which is a critical maintenance component for pipelines. The third valve is a hydraulic- actuated emergency shutdown valve (ESD) designed to protect the platform on which it sits from back flow from the export pipeline that stretches 124 miles (200 km) to an onshore refinery.

Aside from their massive size, we were presented with several challenges when designing these valves, said Marc Ayel, regional product manager, FCT trunnion-mounted ball valves. We had to create a valve that could last the expected lifetime of the facility while meeting the weight constraints of an offshore installation.

Working with the EPC and end user, the FCT team recommended a series of hydraulic actuators, including Emersons BIFFI custom double-acting OLGA-H 100, for the remainder of the platform. The OLGA actuator is ideal for offshore platforms because it provides extremely high torque requirements so the valve can execute three open/close manoeuvers with a single back-up accumulator charge.

The Biffi OLGA-H 100 actuator is a double acting hydraulic actuator that operates main 38˝ class 1500 riser valve and weighs 5600 Kg. As part of the scope, Emerson provided three separate skids including the control system, piston accumulators and nitrogen bottles. Fire-proof boxes for the three skids were also part of the scope of supply.

Automation solutions in such an extreme environment is critical especially when they are instrumental to the platforms safety, said Stefano Bettini, a business development manager for Biffi actuation products.

Once the platform is completed, these valve automation package designs will be a key component of ensuring the supply of 400,000 to 660,000 barrels of oil daily from this oil field for the next 50 years. For more information, please contact Marc Ayel.