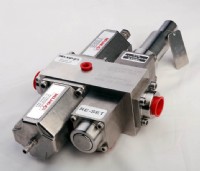 Midland-ACS launches a high-integrity pressure regulator for the pneumatic control systems that are widely used for valve actuation in the oil, gas and other processing industries. Called OPD Stemsaver, the device guards against any failure of the filter-regulator that controls compressed air system pressure, by providing dual-redundant over-pressure protection. It ensures that any downstream actuators for controlling process valves cannot be accidentally exposed to dangerous over-pressures that could be high enough to shear a valve stem or cause other damage. The device is an industry first, and provides plant and automation engineers with a high integrity safeguard against a failure mechanism that could lead to a costly process shutdown or injury.

Pneumatic actuation is very widely used in process automation systems, for controlling and sequencing valves. Automated control valves are particularly common in hazardous areas, such as offshore platforms and refineries. There may be as many as a 1000 actuated valves on an offshore platform for example, one of main markets served by Midland-ACS - part of the ITT Flow Control business.

In hazardous areas, actuated valves are often elements of a plants emergency procedures, such as the safety instrumented system (SIS) that controls emergency shut down (ESD). Depending on the emergency and type of process, valves may be automatically closed - to stop media feeding a fire for example - parts of the plant may be isolated, or media might be vented to atmosphere, via an emergency system vent (ESV).

Although considerable safety design effort goes into ensuring that the actuators that control these valves can be relied on in the event of an emergency, pneumatic actuation systems typically use a single filter-regulator component, and the failure of this component can expose downstream devices to pressures as high as two or more times the norm. This can be enough to cause significant damage, even providing an actuator with enough torque to shear a valve stem.

Midland-ACS developed OPD Stemsaver following a request from an engineering, procurement and construction (EPC) firm working for a North Sea oil producer. A failed filter-regulator had led to the cover of a pneumatic actuator being blown off, leading to costly downtime of operations. The companys OPD Stemsaver design avoids this possibility by providing a dual-redundant pressure regulation facility with one diaphragm regulator, coupled to a spring-tensioned poppet valve. The use of these two different regulation mechanisms provides additional reliability.

As standard, OPD Stemsaver can be set to regulate pressure in the 4-8 bar (58-116 PSI) range. The device is supplied as a single compact unit, fabricated in 316 stainless steel to meet the anti-corrosion requirements of environments such as offshore platforms, and process plants handling harsh media. In use, the secondary regulator is set to operate at a slightly higher pressure than the primary regulator. If the secondary regulator is activated, a reset button also automatically pops up. This can be linked to a proximity switch, to provide feedback to the plants distributed control system (DCS).

The design has now been tried and tested, as Midland-ACS have produced around 100 of the new high-integrity over-pressure protectors for its first offshore platform client. These have been installed over a period of several months to improve the integrity of the platforms network of remote control valves.

If a valve actuator fails, it can easily lead to downtime or even a plant shutdown, and for continuous processes such events can be extremely costly, says Derek Clure of Midland-ACS. OPD Stemsaver provides a practical and economic solution to safeguard against failure of the pneumatic regulator - one that we believe could benefit thousands of plants worldwide.

OPD Stemsaver is available from Midland-ACS as an individual component. It is also compatible with the companys innovative modular pneumatic control manifold - IMpact. This is a universally compatible interface block that mounts directly onto valve actuators, and accepts a range of field-proven pneumatic components. IMpact saves space and costs and is used by many of the worlds foremost control valve manufacturers - with tens of thousands of installations worldwide.

A datasheet on OPD Stemsaver can be downloaded from: http://www.ittflowcontrol.com/files/mid-acs OPD brochure.pdf