How far can you go wearing a BVAA Hat? 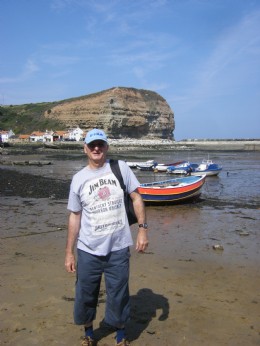 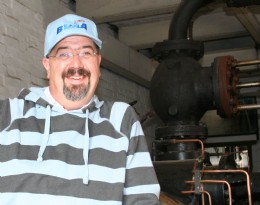 The BVAA Hat continues to travel, albeit closer to home this issue. Pictured is regular Hat competition winner Graham Lomax of Polyflor Ltd, but where is he? Theres £50 to the charity of your choice if youre the first to deliver a correct answer to rob@bvaa.org.uk.

Despite the great depth of knowledge of old valves in the industry, no-one was able to name the (allegedly) Huddersfield-made Corliss Valve featured in the last issue aboard a Pollit and Wigzel steam engine. J.W. Jarrett of Radlett Valve identified it as a Screw Lift Globe Valve. However Gil Richards of Gilbert Industries noted that the Corliss Valve  which internet research reveals as a USA invention - was associated with the Jordan sliding gate regulator and control valves, first used in 1947, which formed an important part in the formation of the Richards Industries Valve Group. Like all old valves theres a tale to tell. If anyone can shed further light on Corliss, Rob Bartlett would be delighted to hear from you.

On 21st April 2009, BVAA members were delighted to accept an invitation to ...

Mad Hatters How far can you go wearing a BVAA Hat? How about the entire ...

The 1st of September saw the latest in the BVAAs series of Desktop ...

Stronger Together - Working Via the BVAA Results in Record Orders

A few issues ago, we covered a story involving our members Heap & Partners, ...