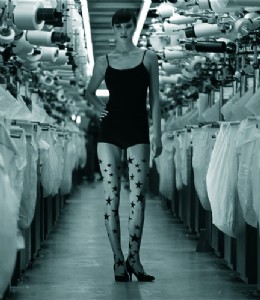 The story doesnt end there, as Spirax Sarco is currently helping Courtaulds on production improvements and upgrades that could deliver significant savings in steam consumption at the Belper site.

Courtaulds gained eco-factory status last year, making it the first UK supplier site to win the coveted recognition from M&S. The eco-factory scheme is part of the wider drive by M&S to operate its entire supply chain more sustainably, with only 18 M&S suppliers around the world making the grade at that time.

Without the assistance and technical support of Spirax Sarco we wouldnt have achieved the targets weve managed so far, let alone our future energy saving targets, says Courtaulds Group Engineering Manager Steve Large. We have to save energy wherever possible  its the way well stay in business.

Steam is an important utility at the site, which manufactures around a third of all M&S hosiery. It is chiefly used in dyeing (where the yarn is coloured) and boarding (where the hosiery is shaped and pressed) applications that can often utilise up to 7 tonnes of steam per hour. Most of the existing steam system equipment around the site has been supplied by Spirax Sarco.

The latest steam system improvements are due to take place shortly and will significantly increase steam usage due to production expansion. Courtaulds and Spirax Sarco are continually working together to improve the overall efficiency of the steam and condensate system. The steam system upgrades are intended to improve efficiency by 20%, according to Mr Large.

Courtaulds has worked hard for the last five years to improve its sustainability credentials and has already reduced its energy consumption by 50%, cut water consumption by 20% and eliminated waste to landfill.

The process undertaken to win the coveted M&S eco-factory status has involved a whole range of initiatives, including an integrated building management system, policies around turning off lights, preventing air leakages, voltage optimisation and lower energy lighting. Courtaulds is also recovering heat from the hot effluent from dyeing to heat fresh water for the next batch.