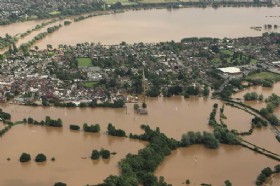 There was extensive flooding in the UK this summer

Rotorks double-sealed electric valve actuator enclosure design has proved its worth in the aftermath of the disastrous flooding of the Severn Trent Mythe water treatment works at Tewkesbury in Gloucestershire (UK). In what has been described as "a once in a two hundred and fifty year event", water from the adjacent rain-swollen River Severn flooded the entire Mythe site at the end of July 2007, in some plant areas to a depth of five metres, cutting off the daily supply of 120 million litres of drinking water to 350,000 customers in the Gloucester, Cheltenham and Tewkesbury areas.

It was imperative that the works were cleaned, repaired and brought back into operation with the utmost urgency and thanks to the tireless performance of personnel from Severn Trent Water and its contractors this was successfully achieved within the remarkably short period of only four days after the flooding had subsided.

As a part of this colossal task, more than 150 Rotork electric valve actuators - encompassing A, AQ and IQ ranges, controlling the automated sequence of water treatment processes throughout the site - had to be inspected for water damage before they could be returned to service. To assist in this work, Rotork immediately provided two site service technicians, when requested on the first morning of the clean-up, who inspected and checked actuators in vital areas including the low lift pump house, which had been submerged to a depth of three metres.

In all cases they found that where water had entered an actuator, it had only done so through cable entries into the terminal compartment and had been prevented from reaching any electrical components within the actuator itself by the O ring seal fitted around the terminal bung. This design feature, known as double-sealing, was first introduced on Rotork actuators as long ago as the 1960s and has been a benchmark of Rotork designs ever since. As a result, all the actuators inspected by the Rotork technicians were found to be fully functional and could be immediately returned to service after cleaning and drying out some of the terminal compartments. In other plant areas, another Severn Trent Water contractor reported the same situation among virtually all of the Rotork actuators inspected by its engineers.

In Rotorks experience, the flooding at Mythe is the latest in a long list of worldwide events over the decades where the Rotork double-sealed enclosure design has prevented serious damage to actuators that have been submerged. Severn Trent Water Area Manager Andrew Bowkett described the flooding as "unprecedented in the 137 year history of water treatment at Mythe. The Rotork actuators acquitted themselves well, assisting the enormous efforts made by Severn Trent staff and our contractors to bring the plant back into full operation with the absolute minimum of delay."

A brochure providing over 30 pages of technical information confirms AUMAs ...

MCE Group plc are pleased to announce our partnership arrangement with DREHMO ...

The highly automated treatment facility, serving a population of 90,000, was ...

However, open solutions are also gaining in popularity on the market due to ...